Combine Training: Tips for the Combine

It’s that time of year again where athletes around North America begin training for their respective football combines. A strong showing at the combine can be the difference between securing a full-ride scholarship, or a roster spot as a walk on. At the professional level, a strong showing can determine whether or not they are drafted in the first round (and thus, a much larger contract). Here are three training pointers each for the 40 yard dash, the 225lb bench press test, and the vertical jump. Implement these tips into your current training for enhanced performance!

Speed is limited by an athlete’s nervous system excitability. Once this potential has been reached, an athlete must improve their technique and start time in order to further decrease their 40 yard dash time.

There are two critical sections which must be addressed in order to run a successful 40 yard dash. The first three steps and the first twenty yards are the two benchmarks which an athlete must train for. It has been shown that the athlete’s with the fastest 40 yard dash times, were those who could accelerate over 18.3 m. There is another reason why training for the start of the dash, rather than training over the full forty yards every time, is important. Part of the athlete’s training program for the combine will include lower body resistance training to increase overall force production when sprinting. When combining speed training with resistance training, too much muscle hardness is created. This muscle hardness will put the athlete at increase risk for injury; thus, training over shorter distances and sometimes at less than 100% of their maximum capacity may save the athlete from injury or overtraining.

Let’s first talk about approaching the start line in the three point stance for maximal effectiveness. A good strategy is for the athlete to place their non dominant leg’s toe to the back of the line. Bring the dominant leg foot behind the first foot, as to touch the heel with the toe. Bring the dominant foot out to shoulder width apart. Now bring the knee of the dominant leg down to the back of the line. Slap the knee with the hand and place the hand on the ground just outside of the knee. Bring the opposite hand down to the ground as well; raise the hips up above shoulder level. Cock the arm on the same side as the forward leg to a 90° angle and have the elbow up above the line of the straight back. This is known as the three point stance. 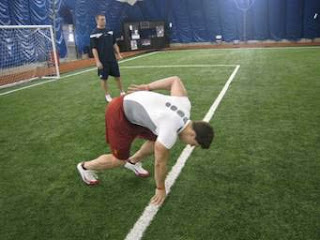 Once in the three point stance, the next goal is to develop a great first step off the line. After getting into the three point stance, the athlete should explosively take one step forward. Look for a long stride with the toe pointing forward (not inward or outward). The athlete should hit top stride length by the second step, so without a strong first step, this goal is unlikely.

By now, the message from Pavel & Stuart McGill has been heard loud and clear. Full body tension is necessary to increase strength and prevent energy leaks through the core. To achieve this while performing the bench press the athlete must ensure the following: heels driven into the floor, tightened glutes, braced abdominals, and an iron grip with visions of crushing the bar inward. The shoulder blades should be pinched together in order to enhance shoulder stability and decrease the distance that the bar must travel. Breathing technique is an important intangible in lifting that cannot be overlooked. Practice the following in order to enhance performance in the 225lb bench press test.

-Take two sharp breaths in through the nose.
-Ensure you are breathing into your diaphragm, not your chest.
-Hold your breath during the eccentric portion of the lift (Valsalva Manoeuvre).
-During the concentric portion, exhale only about 10% of the air (through teeth etc.).
-Maintain a braced mid-section throughout!

When someone says to jump as high as you can, most athletes don’t realize that there is an ideal approach to jumping that will increase performance. The athlete must train their body to optimally perform the triple extension of the hips, knees, and ankles. Ensure that the hips are brought back, maintaining a neutral or slightly arched lower back, in preparation for an explosive extension. Look at what you are jumping at. If the athlete looks at their target (in this case, the highest point on the Vertex), they will jump a little higher than if they were to look forward. As the athlete is jumping, they should drop the shoulder of the arm they are not reaching with. This will allow them to reach just a little higher with the reaching arm. Lastly, aim to land in the exact same spot as you take off. Don’t waste any vertical power by moving horizontally! These tips will not add multiple inches to the athlete’s overall vertical leap, but it’s the small improvements at the combine that make the big difference.